We Will Not Forgive & Forget: The Desi-American Me Too Movement 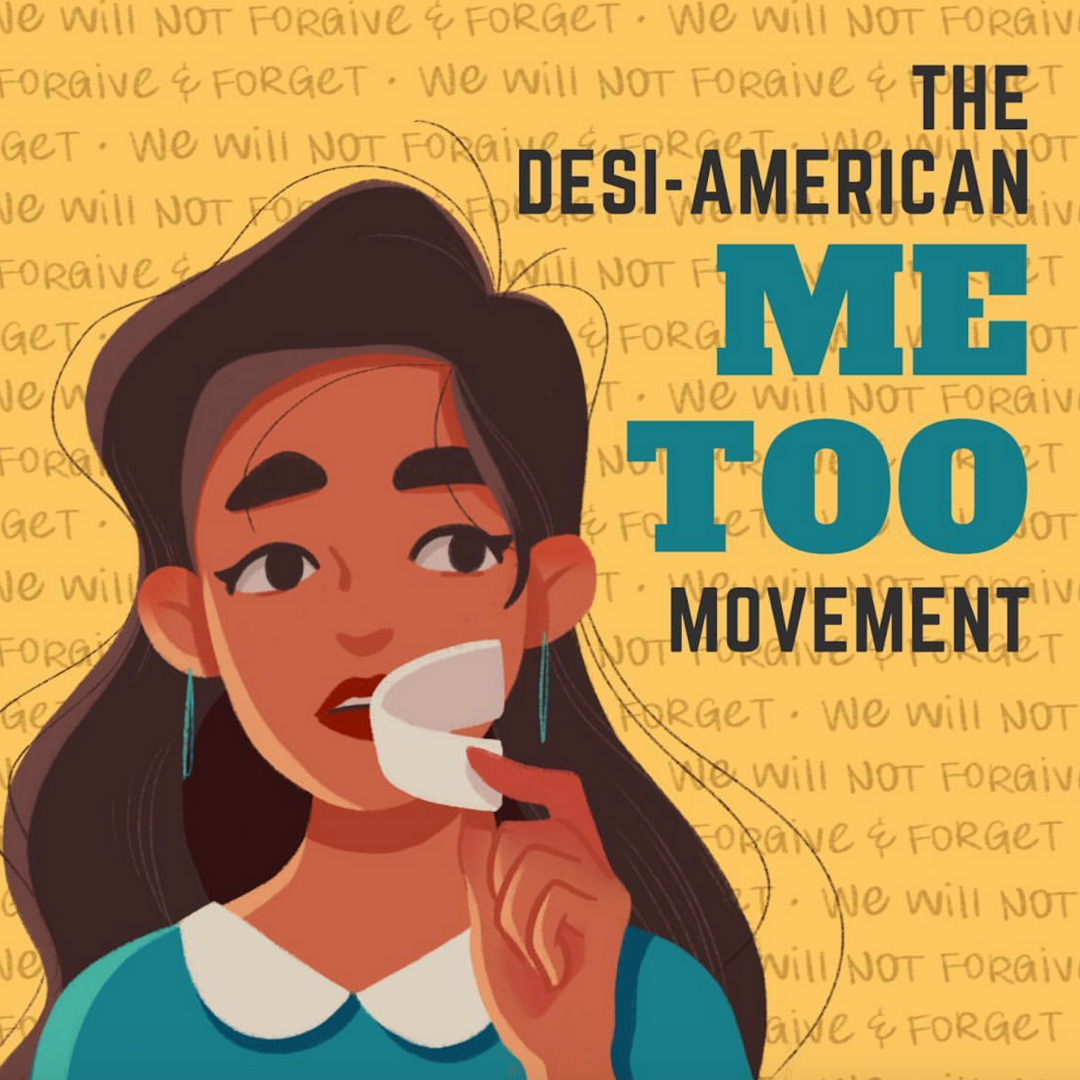 In this wave of a high school and collegiate Me Too movement, Desi rapists, assaulters, and their protectors are being exposed, whether by their survivors or by various anonymous Instagram accounts. Alumni from these institutions who did not feel safe coming forward while they were still in school are naming their abusers too. This era is unique because now more than ever, people can petition for change, find information, and act quickly. Survivors’ supporters are quickly finding where these men are working and demanding that they are no longer employed, publicizing photographs of them, and mobilizing others to spread this information.


Especially for diaspora South Asians, our circles are small and cross ethnic and religious lines. In New York City especially, some youth cross boroughs to go to school and later find themselves at different SUNY’s and CUNY’s. Dance team competitions for bhangra, raas, Bollywood fusion, and traditional styles have college students meeting one another across the country. And of course, the prevalence and growth of South Asian Greek organizations mean that chapters are connecting and providing networks for “brothers” and “sisters.” Understanding complicity and coverups has been just as important as identifying the men that have caused harm, because the bigger question is, who let them get away with it and move on into college and/or the workplace without them seeing any consequences for their actions?


Several things have been disturbing to me throughout these past few weeks. Many of the anonymous accounts that have been publishing testimonies have been soon thereafter deactivated for a range of reasons: they’ve been hacked, they’re receiving threats of doxxing, or the mental health of the person running the account has been so taxed by the sheer amount of graphic content they have to sift through and publish that they are unable to continue to run the account much longer. Their fear is palpable and we, as the readers and followers of the account, know that if they transfer the account to someone else, that the account creator might lose their own anonymity in that process. These comment sections, while largely filled with young women who are affirming and supportive of the post and its submitter, are attracting defensive and angry young men who demand receipts or proof and question the character of the survivor. Even more horrifying has been the response of some of the named rapists, who, rather than take accountability for their actions and make attempts to apologize, have dug their heels in through a narcissistic rationale along this lines of, “I am a supporter of the Me Too movement and I have a mother and sister(s). Accusations like this against me are undermining the credibility of people who have actually been sexually assaulted.”


The first account that I saw (which was taken down within the same week it was created), “Telling My Story,” also named two popular Secondary School Admission Test (SSAT) exam test prep centers in Queens as companies that are run by and/or have hired tutors that are pedophiles and misogynists. These organizations predominantly serve low-income South Asian families and position themselves as companies which can provide children a chance at competitive specialized high schools and hopefully a stable route of upward mobility. The stories in this account, and in many of the account’s offshoots, covered a wider range of experiences because they also included girls’ experiences with being molested by family members, groped by religious figures, or sexualized and demeaned in public spaces by ostensibly members of their own communities.


Recently, a pair of South Asian twins from my high school were identified by an anonymous account (without the permission of the survivor, who subsequently publicly came forward to explain how elements of the published testimony were not wholly accurate and actually re-traumatized her) as rapists while they were college students. The two were de-lettered by their former fraternity and have now deleted most of their social media accounts.


It was this last revelation that forced me to finally pause and think deeply about how overwhelmed I feel by not having an answer to the question, “Where do we go from here?” Some brown men have seen this movement as something that demonstrates a need for more empathy and self-education on what rape culture is and how they actively or passively perpetuate it. Yet the bulk of the response has been their swift backlash to considering their complicity and instead a desire to more fiercely cling to a propensity to replicate the same norms that for so long have insulated these rapists and sexual assaulters in friend groups, within mutual connections, in houses of worship, and even in one’s own family. They are in these fraternities, they are in these dance teams, and they are in positions of power and influence. As long as so many of them can troll behind their computer screens or their phones to undermine critical conversations and the educational content that women are laboring to create and democratize, they stand against and resent feminists who are demanding that we, our mothers, our girls, and our sisters are believed, respected, and understood.


Yes, we need more South Asian counselors, mental health providers, and social workers. These are the people that will provide our survivors with culturally competent healing. But what more are we willing to do in the mean time? Online sexual harassment trainings are being rapidly clicked through with people sharing the answers to the “quizzes” at the end so they do not have to pay attention. Title IX protections for survivors are being eroded by Secretary of Education Betsy Devos. South Asian fraternities haze and appropriate Black Greek traditions, while they are overall modeled on the base cultures of Inter-fraternity Council fraternities. They provide hunting grounds for college men who are theoretically of high character, seeking to uphold our cultures, and creating spaces for brotherhood for the future leaders of our communities.


What are we willing to fearlessly demand, beyond these fruitless calls for men to, simply and only out of their good consciences, start evolving? Can we commit to seeking that these Greek organizations are dismantled? If that is beyond our imaginations, can we ensure that our brothers, cousins and sons avoid these organizations and their members, until the stigma alone has them naturally disappear? Can we require that consent trainings and sexual harassment education is not a single hour or single day event, but are ongoing conversations?


In our communities beyond college, traditions and a culture that mandates respect for elders make it rarely safe (let alone culturally viable or sanctioned) to address the immigrant “uncles” in the community who are dangerous and threaten women’s bodily autonomy. The mobilization against Dr. Ferdous Khandeker MD was a unique example of how girls have told not only their own stories, but those of their mothers’ as well. There are no easy solutions, but something that has shaped why these testimonies against Dr. Khandeker have been so delayed is because we have not yet normalized a reaction to these revelations in which men are the recipient of our anger and righteousness for raping, assaulting and molesting instead of our women being ashamed of being the recipients of this violence. There is more stigma and labeling for the survivors and what others will think about their family’s values and honor instead that has so many still feeling justifiably scared and silent.


I don’t foresee a near future where men will start to hold one another accountable - not until they see that we do not accept the organizations and physical & digital atmospheres they create which make us feel unsafe and unheard.


It is not lost on me that I recently wrote a piece about radical love and an ethics of care when it comes to empathizing with South Asian men - but this was as it relates to mental health and our need for collective liberation. Until they are mutually committed to seeing our oppression under cisheteropatriarchy and we are moving forward together with brown men’s uncompromising reciprocal investment in our freedom, we must continue to hold that accountability and de-platforming assaulters is not punishment, but actually a form of community care.

Shivani is a budding South Asian American racial and immigrant rights advocate. She is a member of the New York City Chapter of National Asian Pacific American Women's Forum, on the Emerging Leaders Council of Planned Parenthood Hudson Peconic, and serves as the Vice President of University Chapters of MannMukti.