Asian Americans have always faced racism through racial slurs, discrimination, and microaggressions that are often played off as “jokes.” In our current digital age, social media is a place riddled with racist remarks towards all people of color. Hiding behind an anonymous account, netizens have the power to say hate words and go unaccounted for. Twitter, Instagram, and Tik Tok are common places where you see racist comments and jokes. Asian American racism has a history of being normalized and often used for jokes on all sources of media: television, film, social media, etc. As Asian Americans face a new wave of racism due to the COVID-19 pandemic, they are no longer letting blatant racism be passed off as harmless jokes and ignorance.

The social media platform, Tik Tok, is known for creating viral trends, and what more of a trend could a world-wide pandemic be? At the start of quarantine, a trend emerged called “How’s my form?” Various creators posted videos using Asian stereotypes as a way to “entice” Asians to continue watching their video and end with an image of the creator pretending to eat an animal (usually a bat, cat, or dog), asking “How’s my form?” These obviously racist videos were not seen as such based on the comments, where people just continued to play it off as a joke. After such Tik Toks got criticized, people stepped up telling Asian Americans who were mad to calm down and understand that the video was just a joke. One comment on a Tik Tok following this trend states, “I’m pretty sure this isn’t racism, it’s discrimination. Also, it’s stereotyping the Chinese race. So not really racism.” The issue with this statement is that racism includes prejudice, discrimination, or antagonism. It is comments such as these that indicate that stereotyping and discrimination are ok, but racism is something completely separate that is not ok. Separating discrimination and stereotyping from racism only indicates how normalized it is to play off Asian American racism as a joke.

Even on Twitter, tweets date back as early as 2010, just a few years after its launch, there are racist tweets towards Asians and Asian Americans from anonymous people and people who have verified accounts. Here are some examples: 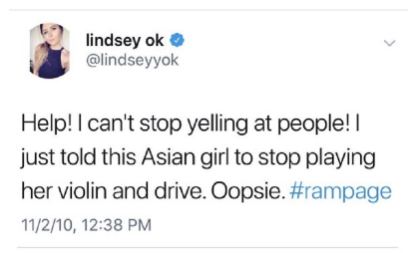 This existing racism has only been on the rise ever since the pandemic. People went to Twitter to blame China for creating the virus and generalized that blame to all Chinese people. Even other Asian races have been affected by the racism generated by the virus, furthering the ignorance that people have towards correctly identifying an Asian race and generalizing all Asians as one. The racism caused by the pandemic only furthered violence, hate speech, and microaggressions towards Asian Americans. It is at the point where a study that examined social media generated discrimination towards Asians has determined that a third of the Asians surveyed had experienced some type of discrimination. The study also shows concern that social media reinforces the perception of discrimination and as the pandemic continues, Asians will face even more racism online.

To combat online racism, there are suggestions for Asians to state facts in order to challenge racist comments. In the event that something is directed towards you, react calmly, remember that it is ok to defend yourself, but do so in a manner that educates the other person that they are being racist. Racism comes from ignorance, so if there are cases of racist videos or comments, react towards the issue by stating how it was wrong and that what was done was not a joke and is furthering the normalization of racism towards Asian Americans. Having a conversation about acts of hatred and racism towards the Asian community is necessary to educate people that certain action is not tolerated. Often times, if you see something that is racist, reporting it is always an option as well. Preventing racist acts and educating people is the goal. Racism towards Asians is not tolerated and should no longer be normalized as “jokes.” Bring awareness to the situation, share what is wrong with certain videos or statements, and spread awareness.